This is the first post in my visualization remake series. In each episode, I plan to cover motivations for the technique, share what I made and learned, and list other places where you can see this technique in context. The purpose of the remake is to build my knowledge, and not to critique the original design.

Ben Jones @DataRemixed is a wonderful source of visualization inspiration. Last week he shared a Tableau piece that he produced for his Data Visualization class at the University of Washington. 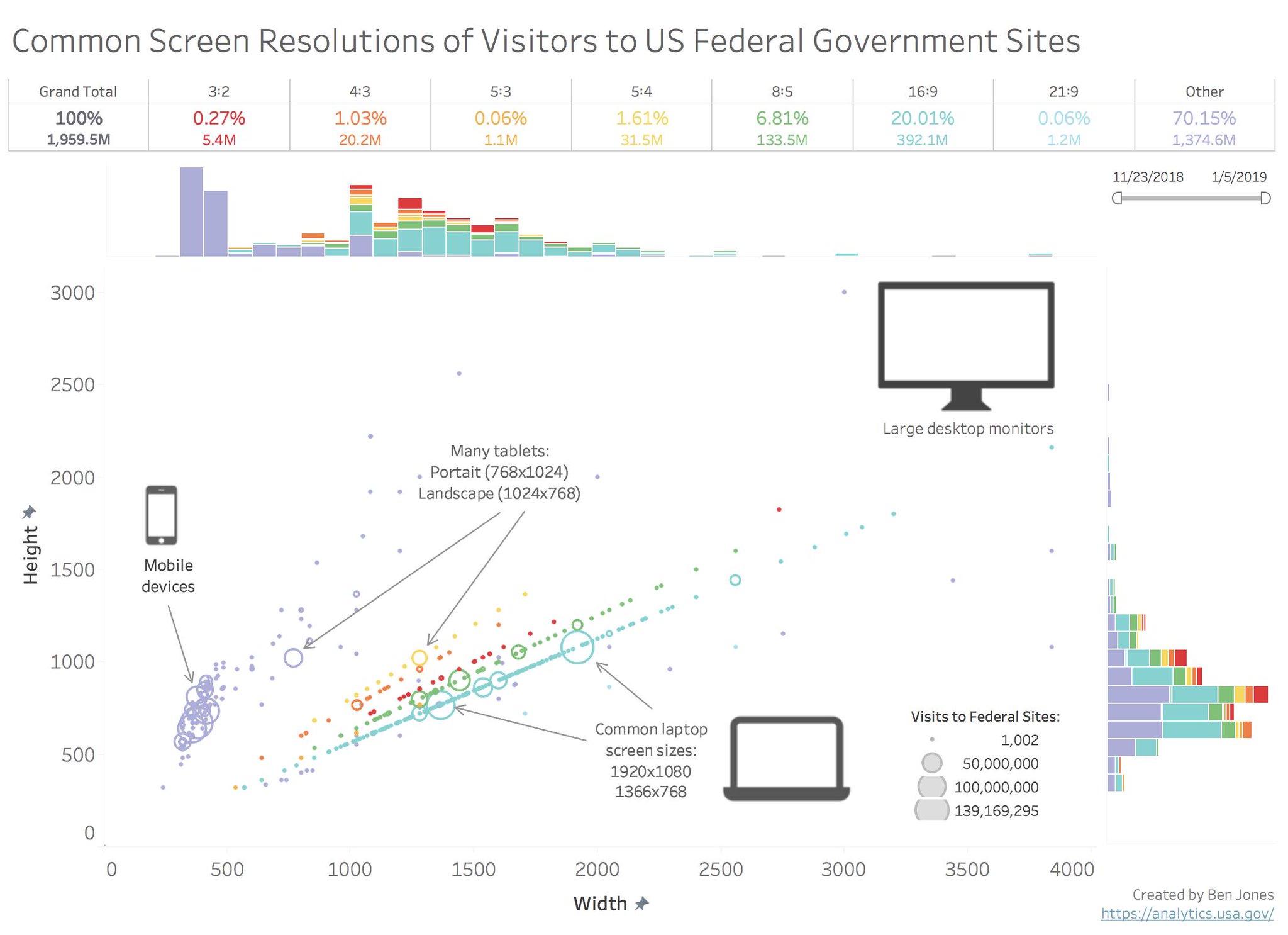 While there are multiple reasons why I found this piece engaging, I’ll focus on the marginal histograms. These are the rainbow “bar charts” along the X and Y axes. While I have made single marginal histograms for timeseries charts, I had yet to apply this technique to scatterplots. It is a good design to launch this series of chart remakes.

Where Do Marginal Histograms Come From?

Although the pieces of the marginal histogram chart are not unusual on their own (it’s just a histogram next to a scatterplot), the combination is not yet mainstream. This may change if Microsoft adds them to the builtin Excel options. Until then, you may have to add explanatory text if you include Marginal Histograms in a report.

Marginal Histograms are a specific type of small multiple. They share the property of being able to use reuse 1 axis for multiple charts at once, as well as the ability to easily compare values by horizontally or vertically scanning your eyes between charts. One could claim that the margin charts are unnecessarily redundant, because all the information in the histograms could be extracted from the central chart. However, while the scatterplot emphasizes individual data points, the histograms helps the viewer understand the big picture patterns.

If someone needs to understand a dataset at both macro and micro levels, this is very useful. From an information density perspective, the Marginal Histogram technique uses much less space than making 3 separate charts which aren’t aligned in this way. If your audience is unfamiliar with scatterplots, it may make sense to present each of the 3 charts individually before showing them combined.

Marginal histograms have a close cousin, the rug plot. Rugplots visualize just 1 dimension, but are helpful when you don’t have enough marginal space to draw the full bars.

Yesterday, Elijah Meeks and Susie Lu released new documentation for Semiotic. Semiotic is a javascript library I’ve been itching to use more, and this remake seemed like a good way to learn the library.

Things I left out

Tableau unlocks interactive capabilities very quickly. I decided not to invest time in re-implementing them, so that I could focus on the static part of this design. Including those capabilites would be important if this type of graphic was on a dashboard that received regular views.

The live demo can be found here, along with an editable sandbox and source code.

This GIF shows a few snapshots of the visual’s evolution. To make it, I took screenshots with the Chrome “Full Page Screenshot” API, used David Yanofsky’s script to stitch my folder of images into a single file, cropped stray pixels with ezgif, and hosted the file on Giphy.

This second GIF captures a few of the checkpoints on my way to placing the aspect ratio rays- before I learned that it was possible to draw them using Semiotic “summary polygons” instead of pure SVG, I was trying out different geometric formulas to scale and rotate my triangles into the right position.

The original demo that the GIF was made for, without the rays, can be found here.

Things to try in the future

Here are ideas for extending the ideas explored in the remake.

These are a few of the open source projects that made this chart possible.

Both of these designs experiment with using density curves instead of just histograms, which dodges the challenge of picking appropriate bin sizes.

seaborn has chart types that gain rugs if they’re given the right boolean.

Have you seen a marginal chart that you like? Please let me know about it on twitter.

With thanks to Amelia Wattenberger for feedback on earlier copies of this design, and Elijah Meeks for leading me to discover more Semiotic features

Since this post was released, Elijah added support for marginal graphics (not just histograms) to both Semiotic and Nteract Data Explorer, making visualizing distributions alongside scatterplots easier than ever!