Last week, I took a break from coding to take notes at these 2 events:

I’ve been attending meetups like these since I started working, in hopes of hearing about topics I wouldn’t otherwise encounter. Here are a handful of some of the ideas picked up last week.

The first of these meetups had 3 presentations.

MachineMetrics brings data analytics to IoT (internet of things) and machinery companies. They provide hardware that can be attached to existing machinery by a maintenance technician, edge computing resources that collect data from the machines, and analytics software for making sense of the data.

Why are analytics so important to manufacturing?

Bill decomposed the company’s approach to data analytics into 4 categories, all of which contribute to creating a data feedback loop among workers, machines, and process.

If MachineMetrics can capture enough of the industrial market, they’ll be able to contextualize the data they report For example, if a company picked a generic analytics tool, they could know that their overall machine efficiency was 41%. With a domain specific analytics like MachineMetrics which aggregates data across the industry, they could learn that this was the 78th percentile across customers. This is a strategy that other data platform companies (from adtech to edtech) have spoken about employing.

What kind of company hits its fundraising target funded in 4 minutes on Indiegogo, and actually ships a product?

As it seemed that he had warmed to the moniker of the “Peloton of rowing machines”, Bruce shared the story of how he built a small team that took the idea from concept to production in under a year. The “Peloton” approach involves developing strategies in content (shooting 5 videos/day), hardware (rowing machine with a 22 inch screen, “Live Outdoor Reality”), and software. In contrast to Peloton, they have decided early to look beyond just the consumer space, and might make a play to sell to hospitals or other large buyers.

Bruce opened by observing that very few human experiences can compare with the satisfaction of moving in perfect sync with someone else. He spoke about how rowing is not a zero sum game (compared to football), and how this made for a much more inclusive sporting experience. He brought domain expertise (as a National level rowing expertise), and found engineering/design expertise in his CTO and the engineering firm Cooper Perkins.

Interestingly, his target market is not existing rowers, who are already well served by the incumbent Concept2 ergometer. When an audience member asked about how this would compete with people who like being on the actual water or kayaking, he responded that this device could be considered a “gateway drug” to the proper water sports, and that it was a good alternative for the days where they’re too busy to go on the water.

With technical progress comes nontechnical problems. Field testing with Virtual Reality (VR) has revealed that designers of virtual spaces would do well to familiarize themselves with designing for Virtual Respect.

A disturbingly large percentage of females taking part in VR have reported experiencing sexual harassment. Michelle’s slides took us on a whirlwind tour of media reports (Taylor Lorenz) recounting some sample experiences. She also described how the psychological phenomena of embodiment (where people would flinch if they saw a rubber hand that was not their own threatened in a mirror) applies to VR experiences. I recommend watching the video when it’s posted, since the slides went by too quickly for me to capture the details.

One surprising snippet of cross pollination that she raised was motivated by the question of “how to bake the concept of consent into the fabric of a virtual world”. She’s conducted research and written up proposals for how to “look at consent acquisition paradigms in the real world, and propose interactive equivalents”. In particular, her work is inspired by the theories of Proxemics studied by anthropologist E.T. Hall: 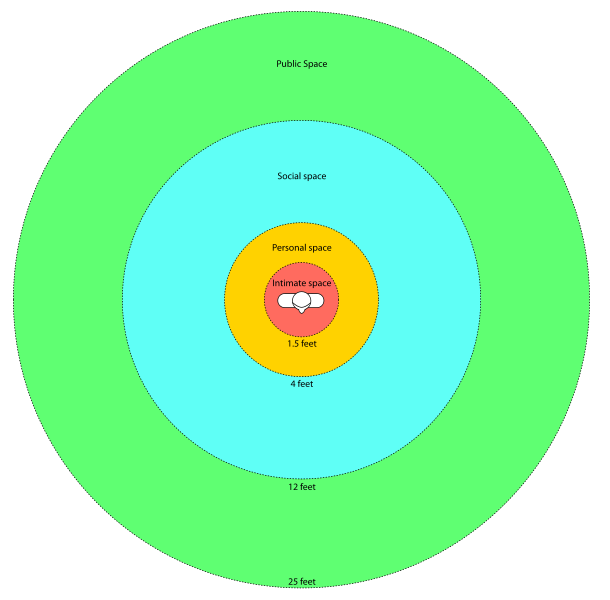 Michelle provided specific examples of different design features for each ring of the circle. In a “living room” settings, her team designed a gesture drawing from sign language for a quick exit, eliminating the need for navigating text menus. In a social space (similar to college campus, where individuals had a reason to gather), participants are shown the rules for the space upon entering so that expectations are leveled. There are parallels with Christopher Alexander’s concept of an “intimacy gradient” in the sequencing of a rooms (see pattern #127 in ”A Pattern Language” for more).

There are several cross-company initiatives to define best practices for addressing VR (Virtual Respect) challenges, but there isn’t a leader yet. This feels similar to the various ”Hippocratic Oath for Data” or “Data Ethics” compacts floating around the data science world. The XR.Community has begun to organize “best practices” around the virtual/augmented/mixed reality spaces.

The challenge of designing for respect is only partly a technical problem. Encouragingly, we can draw inspiration from centuries of designing physical spaces to responsibly design things for the virtual worlds that we’re only beginning to understand.

Recordings of past events are on the Hardwired Youtube Channel. FirstMark’s other meetups, Design-Driven NYC and Data-Driven NYC are also worth attending. However, those gatherings are much more crowded.

The conceptual of Lazy Loading is simple. Download only the resources you need right away need on the initial page load, and then request additional resources only when you actually are about to use them. It’s not unlike the olden days of when video games or movies were split across multiple disks, where you’d only insert the additional disk when you needed the additional content. Like many other powerful yet simple concepts, it is easier said than done, and something that is complicated by the particular needs of single-page React applications.

Rather than walk the audience through slides, Jeff made a glitch.me app. He made different folders for each stage of his presentation. Each stage (in its own folder) added an additional layer of complexity to a bare-bones React app with multiple routes. This minimalist incremental stacking approach mitigated the code volume overwhelm issues that some other technical demos that I’ve seen have faced. The glitch environment permitted code editing on the fly, as well as running Bash commands in a remote terminal. This was the first glitch.me based meetup presentation I’ve seen, but it’s one that I’d like to emulate in a future presentation.

I had to leave before watching the other presentations. Most of this Meetup’s talks are uploaded to Youtube.